An Evening with JD Souther All the Hits. Some of the Stories

Songwriters Hall of Fame inductee JD Souther is “one of the most celebrated
songwriters of his generation,” writes Interview Magazine. “Raised on a steady diet of
big band and jazz during his childhood, Souther has routinely returned to that music—
as well as the genius songwriters of the early 20th century (Gershwin, Cole Porter)—for
inspiration. On his latest studio album, Tenderness, Souther combines these musical
threads, striking a perfect balance between understated jazz and the ineffable pop
narratives that have been the backbone of much of his greatest work.”

JD’s latest releases include Tenderness (Sony Music Masterworks), described by Uncut Magazine as an album that connects “LA’s ‘70s golden age with the Great American Songbook,” with songs that “sound like standards themselves.” Souther has also
reissued expanded editions of John David Souther, Black Rose, and Home By
Dawn (Omnivore Recordings), followed by a reissue of Longbranch/Pennywhistle
(September, 2018/UME).

“Kite Woman” and “Run, Boy, Run” serve as the literal seeds of the country-rock movement Frey and the Eagles perfected to a T. Besides navigating the success of his
own fine solo career (see “You’re Only Lonely”), Souther also went on to be a chief Frey
collaborator on such pivotal Eagles songs as “Best of My Love,” “New Kid in Town,” and “Heartache Tonight.”

Souther has penned countless hits for the Eagles, Linda Ronstadt, Roy Orbison, James Taylor, Don Henley, George Strait, Trisha Yearwood, Brooks and Dunn, and others,
while establishing a cult following as a performer with the Souther-Hillman-Furay Band
and as a solo artist. As an actor, he has appeared in the TV shows Thirtysomething
and Nashville, among others. A passionate animal lover and advocate, JD is also
involved with Best Friends Animal Society.

“Souther proves his work holds up as well as Dylan’s or Simon’s or Lennon and McCartney’s and… deserves such astute re-examination.” – JazzTimes 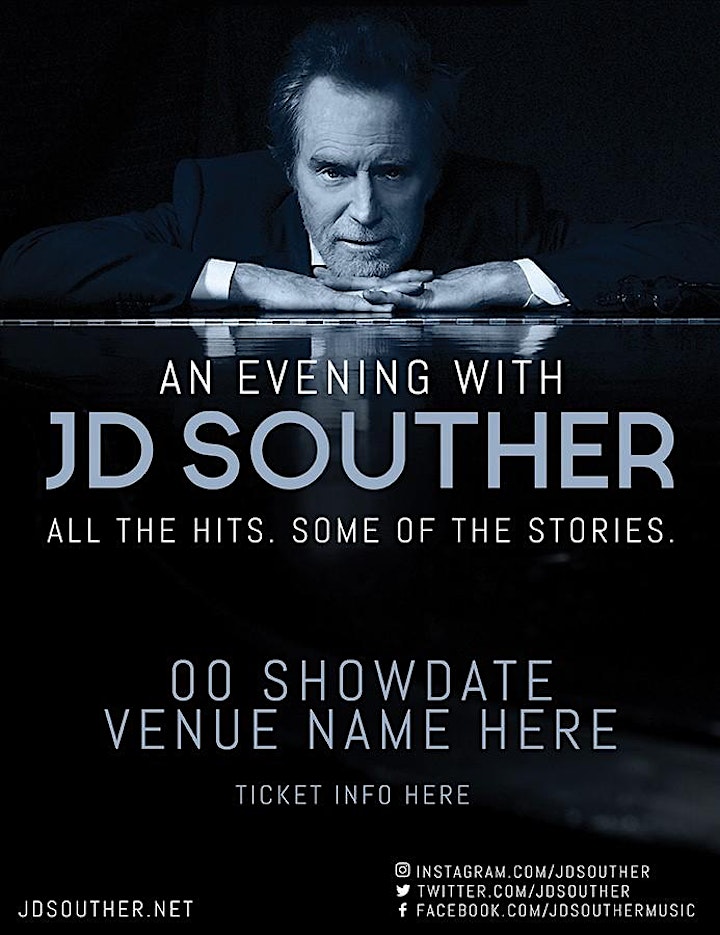